The history of Groß Fredenwalde

The edge of the edges remains stable for a long time. But the ice itself is still moving. Since the edge of the ice does not run straight but falls into individual lobe (glacier tongues), terminal Moraine also have such a lobenartigen course.

The contact point between two praises is called also terminal Moraine Fork. There are usually particularly strong pronounced terminal moraine and large Gletschertore, from which the sander were poured.

In the technical language, for the entire period of the last 2.6 million years as well as for the older glaciation phases, the broader term ice age has prevailed.

It covers both the ice/Kaltzeiten and the intermediate warm periods (in the sense of interglacial).

In the area of the later large Fredenwalde were found from the mid-Stone Age (approx. 7,000 BC) On the vineyard the earliest known human traces in the Uckermark.

In the 1960s, the 20th century. In the course of the century a burial place on the vineyard was discovered. More HERE!
In the millennia of the bronze and Iron Age, a mound cemetery can be located between Gerswalde and Groß Fredenwalde.

The space around Groß Fredenwalde was certainly also in the subsequent Germanic period to the 6th. century.

Presumably from 6. In the late 1800s, the later "Wallberg," a peninsula surrounded by a swampy lowland, was settled by Slavic tribes. from 8. In the course of the century there was a castle complex on a (size 75m x 100m) long artificial plateau. It can be considered as the southernmost Slavic castle in the enlarged Baltic Sea region.

It is one of the few known plants from the middle Slavic period in the Uckermark. Around the year 1000 she was left for unknown reasons.

In the course of the German Ostkolonisation of the 12th Century the Slavic tribes were subjugated by German and Pomeranian princes. Presumably, the remains of the Slavic fortress were conquered on the Wallberg and rebuilt it into a stone castle.

The first documentary mention of Fredenwaldes 1269 with a Brandenburg ministeriales "Alexander de Vredewalde" coincides with this period. In the following decades and centuries, Groß Fredenwalde developed into a "Oppidum" market spot under the rule of the Lords of Stegelitz.

1498 acquired the master of Stegelitz Kin, Bernd II. From Arnim the reign of Fredenwalde. 1545 was the Knight's seat, which in part consisted of edema heathland among the sons of Bernd II. Divided. Sperrenwalde, Götschendorf, Temmen, Milmersdorf, Sternhagen and Golmitz were separated from Groß-Fredenwalde. 1621, in the first years of the Thirty Years ' War, the Arnimsche family branch died in Fredenwalde.

In this difficult time, when the war also did not leave the Uckermark unscathed, their arnimschen cousins followed them from the branch of Götschendorf. Until 1945, the estate remained in the possession of the V. Arnim. The estate is now privately owned

Under Alexander I. Magnus v. Arnim (1659-1727) reached the height of Fredenwalde. The economic conditions were such that Alexander II. 1735 was able to rebuild the manor house at the present place on old foundations. The interior of the church was also significantly redesigned by him.

Alexander I is particularly deserving in the field of school education. Thus he led 1714 before the introduction of compulsory compulsory education in Prussia under Frederick II. In his lordship. Without any difficulties this does not seem to have happened. Thus, 1735 demanded the S 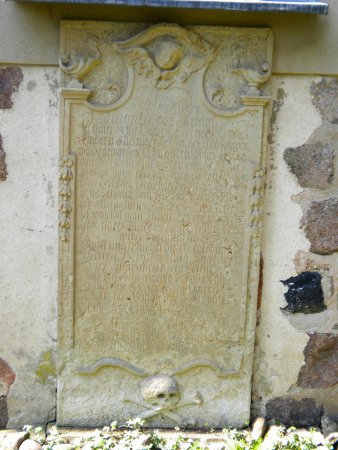 Chulrektor from the rule, this wants to ensure that the compulsory schooling would be taken seriously by the members of the manor.

When Alexander I 1727 died, he left a considerable fortune of more than 60.00

0 Imperial Taler. From his estate we know that he possessed silver cutlery, a Dresden coffee and a Japanese tea service, and a music box worth alone 60 Reich talers.